How PVDF coating provides higher performance than other metal coatings ?

Tuiles 3R offers you products in steel and aluminum painted with PVDF that provide superior durability and optimal resistance to cleaning of graffiti on sidings.

KYNAR 500® and HYLAR 5000® (PVDF) surface finishing products are currently the best treatment products for the siding and metal roof in aluminium and steel. All products from Atas International, Inc., and tile shapes of 3R Tiles are painted with PVDF.

Comparative tests with other finishing products have shown that the PVDF (KYNAR 500® / HYLAR® 5000) achieve better results at the level of resistance to UV rays, abrasion, fading, chemicals, solvents. This treatment also allows to clean stains and graffiti without leaving visible traces or damage the coating.

KYNAR 500® and HYLAR 5000® are compounds of polyvinylidene fluoride (PVDF). PVDF is also used and tested in multiple industrial applications where the product is exposed to extreme variations in temperature as well as multiple chemical corrosive elements.

The comparative strength of the surface treatment of PVDF Kynar 500® was assessed in laboratory tests and exterior exposition to climatic conditions.. Among the results, PVDF has much better resisted to climate exposition and with testing solvent cleaning compared to Acrylic and Silicone-Polyester based products. 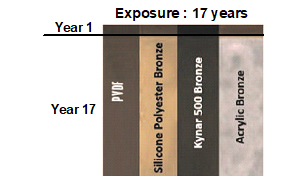 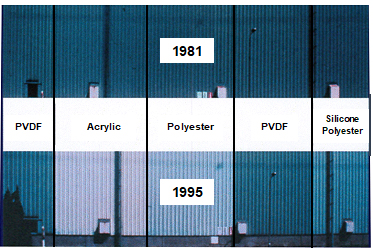 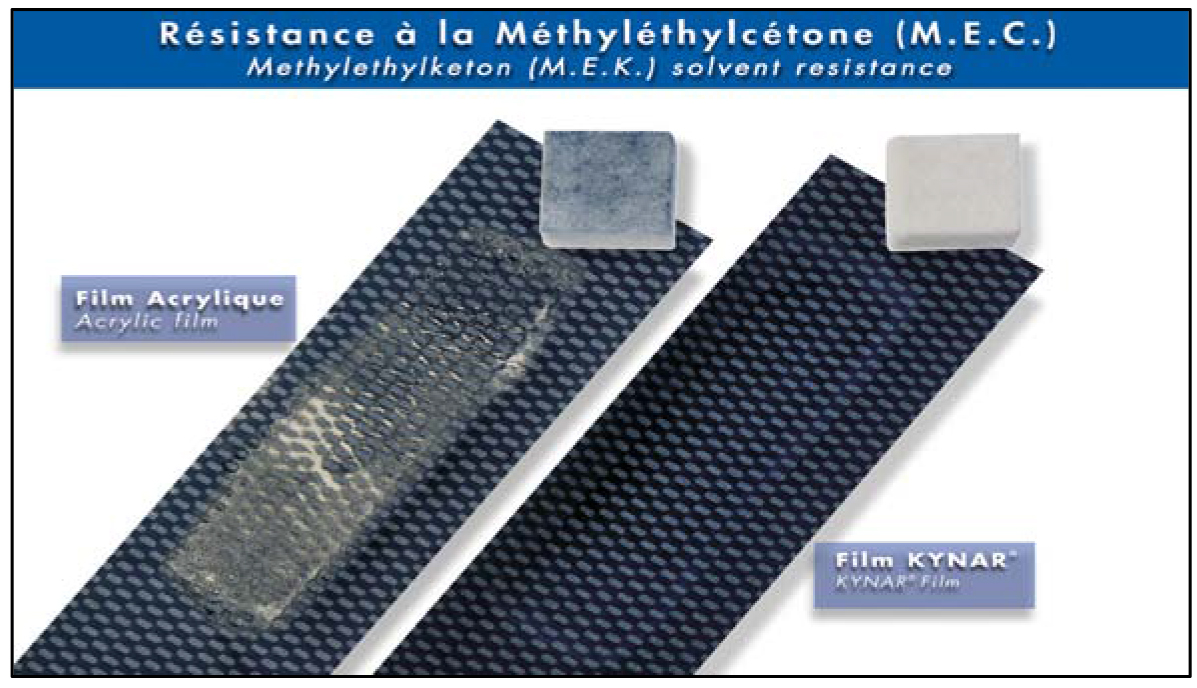 What about the oil canning of metal ?

The metal panel systems distributed by 3R Tiles inc. are available with or without stiffening ribs reinforcement. In both cases, some oil canning may occur on the surface. This is primarily related to the physical constraints inherent to the raw material, steel or aluminum. Oil canning can also be aggravated by thermal expansion, poor installation and uneven leveling of the supporting surface.

During factory manufacturing of metal panels distributed by 3R Tiles inc., the material is systematically rectified by in-line leveling equipment right before the profile forming process. Subsequent oil canning of the metal surface is essentially an aesthetic consideration and does not result from a flaw in the panel manufacturing process.

What is the advantage of Dutch Seam and Monarch panel fastening clip ?

One of the problems related to the installation of metal panels on roofs and sidings is the oil canning. When the temperature changes, the metal panel expands and shrinks, which is normal. Most of the panels are screwed directly on the bridging of the roof along their length. For this reason, dilation could increase the oil canning. The oil canning is apparent.

One little-known benefit of the coil coating process is its ability to apply coatings to metal with virtually no harmful impact on the environment, by making the VOCs all but disappear. With coil coating, solvent-based paints and coatings can be applied with miniscule VOC (volatile organic compound) emissions. Coil coating is a highly efficient ‘closed loop’ process, meaning that harmful solvents and gas are consumed in the combustion process and by-products are incinerated or oxidized prior to release into the environment. In effect, the coil coating curing ovens burn the harmful VOCs, using them as fuel, saving energy and eliminating pollutants. Coil coating achieves at least a 98% rate for capture and destruction efficiency, eliminating toxic pollutants that would otherwise be released into the air.

While water-based coatings and powder applications are also used; their popularity for coating lines is limited. But, manufacturers can rest assured that their solvent-based finishes can be applied in a way that Mother Nature would admire. The coil coating industry is subject to the highest EPA standards and meets and exceeds these standards even as they become more stringent each year. Coil coating is by far the most environmentally-friendly process for applying organic compounds to metal. The end products are also green: coil coated metal is fully recyclable, and coil coated products are often made of recycled content.

For more information about the seemingly magical environmental benefits of prepainted metal, visit the National Coil Coating Association at www.coilcoatinginstitute.org and view the online tutorial titled, Energy and Environmental Benefits of Prepaint

When a homeowner is considering the purchase of a steel roof a common question is whether it will increase the risk of a lightning strike. After all, metal his highly conductive, just like the materials used in lightning rods, so doesn’t it stand to reason that the steel roof will attract lightning?

The short answer is, NO, metal roofing will NOT increase the risk of a lightning strike in any way.

For all intents and purposes, nothing ‘attracts’ lightning. Lightning occurs on too large of a scale to be influenced by small objects on the ground, including steel roofs. The location of the thunderstorm overhead alone determines where lightning will hit the ground. A lightning bolt that is several miles long, generated by a cloud that is more than 6 to 10 miles high, is not going to be influenced by an object the size of your house.

The descending stepped leader of a lightning bolt doesn’t ‘decide what to strike’ until it is very close to the ground. When a cloud-to-ground lightning channel is forming, it is going to strike the ground where the opposing charges are greatest, directly underneath the storm’s most electrically active region. If you are standing at that exact location, you will be hit, even if there’s no metal within miles! Conversely, if you are farther than 500 feet from that location, you could wave your golf club or umbrella high in the air, but you won’t draw the lightning away, even slightly, from striking where it’s going to strike.

Steel does conduct electricity, but steel roofs don’t attract lightning or increase the probability of a lightning strike.

Four factors affect the probability of a lightning strike:

• Topography: a structure located on a mountain or hill has a higher probability of a strike than one in a field.

• Structure size and height: a tall structure or one that covers a great deal of ground has a higher probability of a strike than a short or small building.

• Severity and frequency of thunderstorms in the structure’s vicinity. However, on occasion, lightning does strike a house. If your home were hit, the steel roofing would disperse the energy safely through the structure. Since steel roofing isn’t combustible or flammable, it’s a low risk and desirable roofing option where severe weather is concerned — especially for lightning.

What about sound emission of metal roofing ?

Isn’t a metal roof noisy? It is one of the most frequently asked questions about metal roofing.

The theory that a metal roof is “noisy” stems from the memory of a barn, or a patio awning, where there is nothing between an individual and the roof, except air. The more adept one becomes at answering this question, no a metal roof isn’t noisy.

The sound of rain pattering on a rooftop is not necessarily classified as noise. Noise is defined by Webster’s dictionary as Sound or a sound that is loud, disagreeable, or unwanted. Sound or sound pressure is measured in units known as decibels (dB). The softest sound the human ear can detect is measured at 0 dB, while the loudest sound is registered at more than 175 dB. Existing standards indicate that sound levels should not surpass 70 dB if general conversation is desired; whereas, frequent exposure to levels exceeding 85 dB will impair an individual’s hearing.

Although this is not a technical paper on acoustical concepts, it bears mention that the human ear does not distinguish variations in sound until the sound pressure level has been increased by 8 dB. A study was conducted by The Acoustic Group at the University of Luleå, Sweden, to determine the amount of sound emitted when rain falls on various roofing materials. The study concluded that metal did not register a significantly higher sound level than shingle. In fact, the sound differential between shingle and metal was only 6 dB.

The variation of sound pressure, as it relates to rain falling on a metal roof, is dependent upon various factors. The most important factor relates to the method of construction. A metal roof installed over open framing will register a louder sound than panels that are installed over a solid roof deck. The roof deck literally absorbs or muffles the sound. It is with few exceptions that most metal roofing products on the market today are installed with some form of underlayment material that absorbs sound. 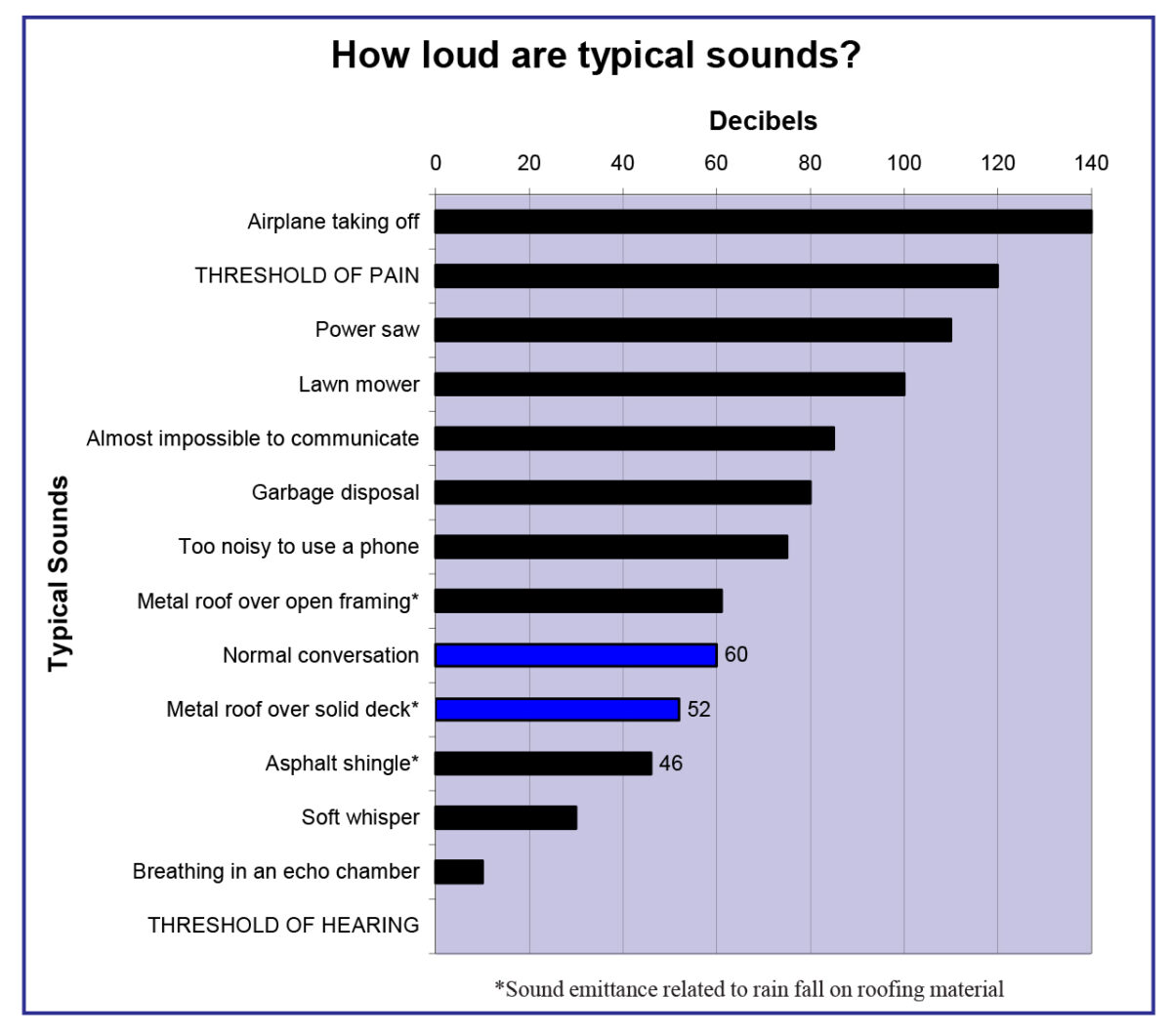 The metal roofing covered most of our houses before World War II. Our most beautiful ancestral homes and our heritage churches are often covered with metallic roofings. During the war, the metal was requisitioned. The asphalt shingles, more economical, came in the following decades. However, its lifespan is much shorter, making it a product of temporary and more polluting facility.

The shingles are not or little recycled. Sensitive to UV light, they emit solvents in air, in particular under exposure to the sun. Most often black, they contribute to heat islands, i.e. the increase in temperatures in urban areas.

On the other hand, steel is a recyclable material at the end of life, which will be very long.

The Tuiles 3R metal roofing tiles have an interlocking system that prevents buckling of the roof by expansion and contraction during temperature changes. The system allows the tiles to move without buckling or pull on the screws. Your roof will retain its consistency and its seal despite the years.

Anything else you’d like to ask?
TALK TO ONE OF OUR ADVISORS